Concept for a new urban district with residential and commercial spaces, social and cultural establishments as well as public open and green spaces. As a tribute to its earlier incarnation as an industrial site, the design uses the historical spacing and integration of the key buildings as a starting point for the distinctive identity of the new complex.

Above all, the new district is diverse in its function, unmistakable in its appearance and high quality in its open spaces. Using the treasured industrial legacy of the former Holsten brewery as its red thread, the design weaves a vibrant new urban district. The historic existing buildings are used primarily for cultural and commercial purposes; most of the new construction, with largely uniform height levels, is designated for residential use. Individual standalone buildings have distinct industrial character and serve as counterpoints with their unconventional proportions and rich architectural detail. Additional buildings round out the complex, using positioning and building material to establish their relationship to the overall design – as seen in the skyline characterized by not two but four towers.

By integrating the existing corner buildings into perimeter block-edge structures, they no longer have a fragmentary character. The new construction incorporates traditional features such as roof shape, building depth and height. A spacious park at the district’s geographic center provides a hub connecting all of the public buildings to one another. The Holsten Areal becomes a “city district of short distances” with clear links between the various spaces for leisure activities, residential living and work. In keeping with this philosophy, the complex is fully pedestrianized and permits incoming deliveries only during certain time slots. 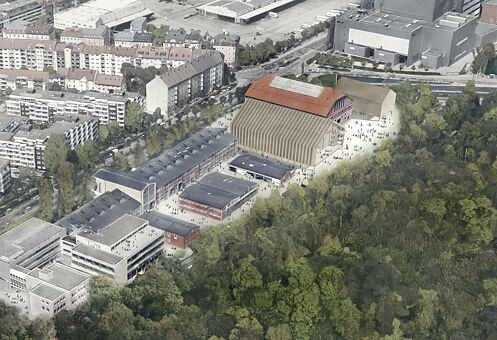 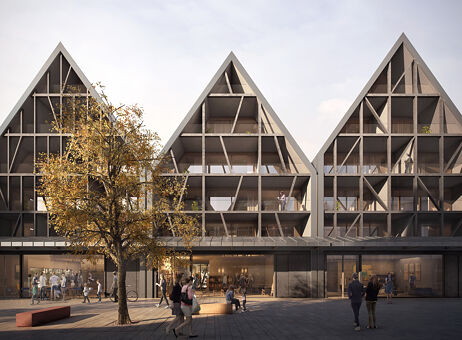