Located on the site of a former envelope factory in Pasing, the design proposes five new buildings with 175 residential, retail and office units and an underground parking with about 200 spaces.The new construction is centered around the landmark factory building from 1909, which will be retrofitted and renovated to offer modern offices across four floors and a restaurant in the single-story extension to the former boiler house.

Key features of the design include the communal public spaces and the amenities inspired by the ‘sharing concept’. A bicycle repair shop, a communal kitchen, a parcel station and ample bicycle storage are as integral to the design as the bike-sharing scheme with both cargo bikes and e-bikes. Residents will also have access to a caretaker on site to perform a variety of tasks.

The design varies between the façades facing the interior and the façades facing the city, with the former creating a sense of tranquility and objectivity, while the latter presents a sculptural surface with prominent bay windows. The bay window motif developed for the city-facing façades gives the architecture its unique character, while these asymmetrical protrusions also expand the living space from the inside and offer residents 180-degree views. 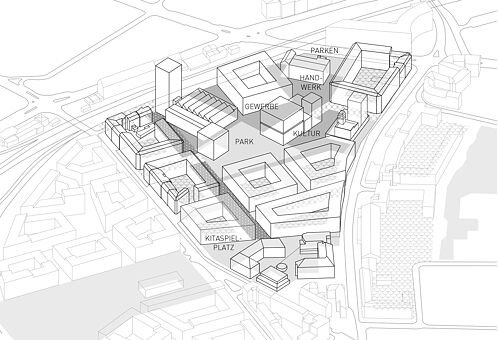