Development of a feasibility study for temporary premises to serve as the main concert hall for the Munich Philharmonic Orchestra for a period of five years.

The study develops and evaluates three different scenarios to assess whether it is feasible to use an industrial space at Munich’s municipal utility as a temporary concert hall. The study provides a detailed site analysis regarding the potential of the space, the location and the options for use by the Philharmonic Orchestra. A key factor in the study is the effort to leverage the qualities and potential of the existing buildings at the site, while also using effective interventions to reshape it temporarily. The study develops three separate scenarios that deal mainly with repurposing this building, which is under heritage protection, into a concert hall. Scenario 1 found that it was impossible to square the exacting demands in terms of functionality and acoustics with the hall’s spatial and structural realities. Scenario 2 suggests it would be feasible to construct a new temporary hall by partially demolishing several existing structures at the site. Scenario 3 resulted from a reworking of Scenario 1 when that solution for the hall proved challenging. It offers an entirely new approach that does not endeavor to construct a concert hall inside the listed building, but rather to place a new “twinned” hall adjacent to it. The existing building would become the concert hall’s foyer and a public forum and center for the orchestra. 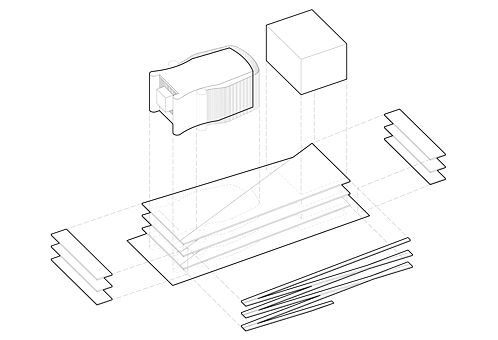