The new Siemens Headquarters is designed as a generous space open to varying interpretations and specifically dedicated to the public at large. As such, it reflects the company’s new architectural awareness and activates an area of Munich’s inner city that has yet to capture the public’s attention.

A key feature of the concept is the prominent link between the museum district and the inner city in the form of a public arcade that bisects the property diagonally. The arcade houses spaces designated for public use, such as exhibition and presentation facilities as well as restaurants. A dense, web-like structure with open space workstations weaves itself around the arcade. On the one hand, forces that bolster tradition and stability are at work in the design – responding to nearby architecture such as Siemens’ current headquarters in the historic Ludwig Ferdinand Palace and other grand Leo von Klenze-designed buildings on Wittelsbacher Square from the 19th century. On the other hand, the design confronts new ideas and remains therefore architecturally vital.

As a symbol of this dichotomy, the design introduces a gradual transformation of the spatial structure and the building facade. A perforated façade of flush grouted precast concrete panels corresponds with that of the Palace, gradually evolving into a fully-glazed façade with a second skin of contoured, floor-to-ceiling frames made of the same concrete material. 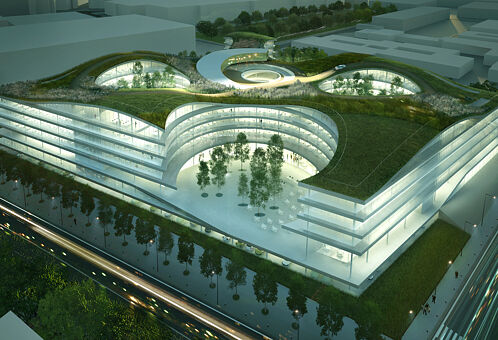