Through the reconfiguration of its surrounding square, the Cathedral is restored as an imposing presence within the Cologne skyline and liberated from the layers of edifice that have been superimposed for decades.

The overall strategy for the Cathedral environment is the result of an urban planning competition initiated by the City of Cologne. The aim was to develop a master plan for the square surrounding the cathedral, a UNESCO World Heritage Site. In a moderated workshop scenario, the stakeholders directly impacted by the planning – architects, residents, political representatives and administrative officials – all worked together to devise a set of guiding principles for the design.

Establishing clearly-defined spatial situations improves at all levels the livability of the public space around the cathedral. The concept aims, through a process of subtraction, to make existing architecture more prominent. A cleansing and contouring of built structures already in place occurs in separate phases of construction, each exercising the utmost restraint and using minimal, precisely-placed interventions and materials – with the goal of creating an stimulating, versatile setting for the Cathedral and its adjacent buildings.

The redesign of the eastern side of Cathedral square included renovations of the baptistery. The baptismal font, acknowledged as the oldest of its kind north of the Alps, is on display before a niche of bare brickwork. As part of the overall urban planning concept, the area outside the baptistery was transformed into a large, multiuse public space. The adjacent showrooms of the cathedral workshop and the Romano-Germanic Museum further enhance the cityscape, giving the street itself museum character. 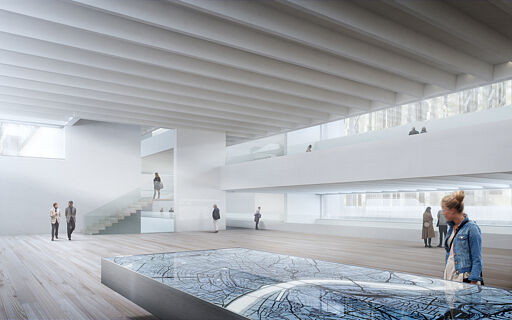