Herz Jesu Kirche (Church of the Sacred Heart) in Munich is one of several contemporary churches that were built in Germany to mark the turn of the millennium. Over the past 15-plus years, this church has become one of the city’s landmarks and a globally recognized icon of ecclesiastical architecture.

The architectural concept is based on a process of elaborating and integrating contradictions. Crossing boundaries becomes the strategic principle for the church – an architecture of conversion and transformation rather than an expression of unchanging dogma. The clear-cut cubature of the church building dissolves thanks to its ambiguous and mutable exterior. The boundaries between interior and exterior are not definitively prescribed, but rather chosen in response to the situation at hand. The church presents itself as a box inside a box– the interior box clad in vertical maple louvers and the exterior box encased in glass. Herz Jesu Kirche is the architectural rendering of transcendence: the space facilitates experiences that transcend sensory perception. The use of lighting is a key factor. The sanctuary is bathed in diffused light, although the source, the provenance of the light remains a mystery thanks to the arrangement of nested boxes with seemingly contradictory physical properties. Two massive glass doors in intense blue frame the church’s entrance portal and can be fully opened for special religious ceremonies. The brainchild of Alexander Beleschenko, these doors act as a prelude for the sacred visual narrative inside, which was developed in collaboration with several artists: the Stations of the Cross in the space between the outer and inner cubes by Matthias Wähner, the altar wall by Lutzenberger and Lutzenberger, and a series of works embedded in the floor of the nave entitled “The Veneration of the Five Wounds” by Munich-based artist duo M+M. 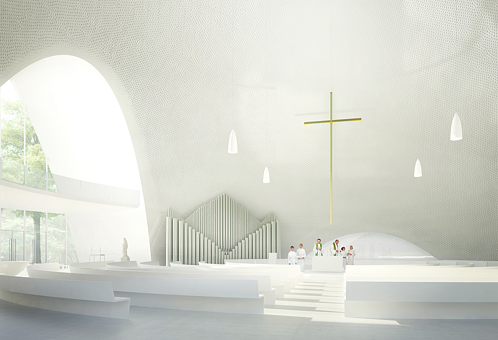 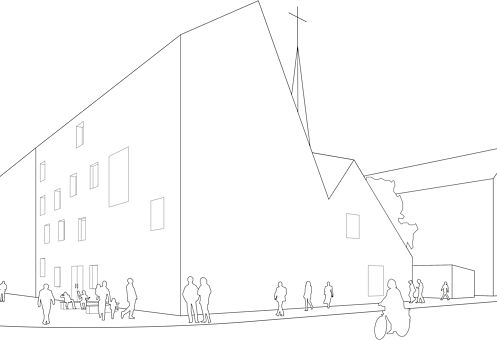