In a dialogue with the striking dominance of the neighboring opera house, the design concept for the Deichmanske library responds with metaphorically associative architecture and expressive symbolism. The new building also takes inspiration from the city blocks and thoroughfares of Oslo’s urban grid.

In its architectural volumetry, the design engages with the urban structure of Oslo and maximizes its use of the available footprint. It deliberately avoids any appearance of grandeur or hierarchy vis-à-vis the opera house; there is no explicit front or back to the building – quite the contrary: the new library acts instead as an interchange within the urban space allowing egalitarian access from all directions. The organization of the structure mimics that of a tree, having no particular orientation, deeply rooted in the ground, nurtured vertically and branching out on the horizontal plane. The building offers a new library archetype that is expressly dedicated to the general public as a sociocultural meeting place. Consistent with that premise, the interior structure does not prioritize explicit, pre-defined spaces, but rather develops a polyvalent structure: versatile, flexible and able to be reconfigured at any time.

Areas for communication are deliberately interwoven with areas for contemplation to encourage social interaction and shared cultural experiences through the configuration of the library space. The use of different materials underscores the two categories of space within the building. Vertical lamellae made of thin wood sandwich panels feature across the façade, acting as a design element as well as glare protection. 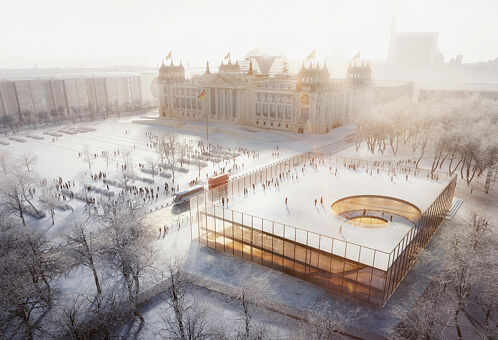 Visitor and information centre for the Bundestag in Berlin